AGOVV - Wikiwand
For faster navigation, this Iframe is preloading the Wikiwand page for AGOVV.

AGOVV (Dutch pronunciation: [ˌaːɣeːjoːveːˈveː]) is an association football club from Apeldoorn, Netherlands. It was established on 25 February 1913. Its professional branch was dissolved in 2013. AGOVV's male first squad plays in 2019–20 in the Derde Klasse.

The club was founded on 25 February 1913 – by the teetotalers singing club – as AGOSV, which stood for Apeldoornse Geheel Onthoudersvoetbalvereniging Steeds Voorwaarts Dutch pronunciation: [ˈaːpəlˌdoːrnsə ɣəˈɦeːl ˈɔntɦʌu̯dərsˌfudbɑlvəˌreːnəɣɪŋ ˈsteːts ˈfoːrˌʋaːrts], after having experienced firsthand the drinking abuse after sports matches on Sundays.[note 1] When the club joined the football association of Gelderland, the club had to change its name, because there was another club called Steeds Voorwaarts. The name was changed to AGOVV, or Apeldoornse Geheel Onthouders Voetbalvereniging, which means Apeldoorn football club for teetotalers. The meaning of the abbreviation was altered in 1921 to its current name. AGOVV became Alleen Gezamenlijk Oefenen Voert Verder Dutch pronunciation: [ɑˈleːŋ ɣəˈzaːmə(n)lək ˈufənə(n) ˈvurt ˈfɛrdər][note 1] (Only Practising Together Brings Us Further).. 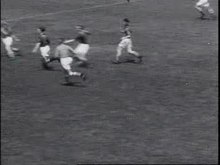 Bioscoopjournaal in 1942. In the Zuiderpark Stadion in The Hague, the football clubs ADO and AGOVV play for the championship of the Netherlands. (5–2 in favor of ADO).

AGOVV achieved its best results in the 1941–42 and 1948–49 seasons, where they won the title in the Eerste Klasse East division and in the First Class Championship (today known as the Eredivisie), finished in third place.[2]

AGOVV became a professional club in 1954; the same year as professionalism in football was legalised in the Netherlands. After having played for several years with varying success in the Eerste Klasse and in the Eerste Divisie from 1956–57, the Royal Dutch Football Association (KNVB) formed a football pyramid with three divisions from 1962: the second-tier Eerste Divisie and the third-tier Tweede Divisie and above that the Eredivisie; the premier division in Dutch football. AGOVV mostly spent its existence in the lower regions of these tiers and were removed from professional football in 1971.[2] The most famous players from the period of professional football were goalkeeper Joop Niezen, who later became editor-in-chief of Voetbal International, and centre-forward Sietze de Vries.[3][4]

In 1971, the club was removed from professional football by the KNVB by the dissolution of the Tweede Divisie.[5][6] This led to protests among the citizens of Apeldoorn. The club then played in amateur competitions of the KNVB. Since then, De Blauwen for many years advocated a return to the professional divisions of the KNVB. Incidentally, a uniform strategy for achieving this only started in earnest in the mid-eighties, when a policy plan was presented that initially had to ensure AGOVV's return to the top of amateur football.[7] This eventually yielded results: in the late nineties, the club returned to the upper echelon of amateurism and focused on professional football.[2]

Upon returning to professional football, in the 2003–04 season, former international Jurrie Koolhof was appointed as the club's head coach. He succeeded Stanley Menzo, who did not have the necessary coaching diploma.[10] That season, forward Klaas-Jan Huntelaar became top goalscorer of the Eerste Divisie with 26 goals.[11] After two seasons with average success and without having made it to promotion play-offs, management sought a new approach and Koolhof's contract was not extended. Menzo was now in possession of the diploma and was appointed head coach for the 2005–06 season. AGOVV won the post-competition with Menzo for the first time, but he left the club for Volendam after the season. Menzo was succeeded by Rini Coolen.[12] Coolen was sacked halfway through the 2006–07 season due to the poor results. The season was completed by the two assistant coaches Roberto Klomp and Marco Heering without success: AGOVV finished last in the league table.

John van den Brom was contracted as head coach for the next three seasons. A 6th place finish in the 2009–10 season was the best result since AGOVV's return to professional football, when the club would play one last time in the promotion play-offs. After the 2009–10 season, Van den Brom moved to ADO Den Haag, notwithstanding his one-year ongoing contract; Hans de Koning succeeded him. Because AGOVV and De Koning could not reach an agreement on a new contract after one season, Hans van Arum came over from Vitesse as the new head coach; his first head coaching job.[13] Van Arum was suspended for "security reasons" for the last game of the following season, 2011–12.[14] AGOVV had only missed the bottom spot in the league because FC Emmen had been deducted six points due to financial irregularities.[15] Andries Ulderink became manager for the 2012–13 season.[16]

There have been plans in the AGOVV organisation to build a new stadium for 6,000 spectators in the southwest gate of Apeldoorn. Another possibility was the buyback by the municipality of Apeldoorn of the existing site that had been sold to AGOVV in 1999, after which the football club would become solely a tenant. In March 2012, it appeared that AGOVV considered the price offered to be too low.[17] There was also the intention to disconnect the professional part of AGOVV from the amateur branch in order to create a new professional football club in sports park Malkenschoten, in which there would be intensive cooperation with amateur football in Apeldoorn, including the independent amateur clubs of AGOVV, Apeldoornse Boys and others.[18]

However, these and other future plans had become highly uncertain due to a tax debt of more than €400,000. The tax authorities filed for bankruptcy in December 2012.[19] On 11 December 2012, the court gave AGOVV four weeks to submit a rescue plan.[20] In early January 2013, the KNVB disciplinary committee deducted two points from the club in connection with the financial problems. With that, AGOVV dropped from eleventh to fourteenth place in the league table.[21] On 8 January, AGOVV were declared bankrupt in absentia. The professional club AGOVV was officially declared bankrupt on 11 January 2013, when it was announced on behalf of its board that the bankruptcy was resigned, and the team was pulled from the league.[22][23] Fans held another fundraiser for their club, which was, however, in vain. Only €20,000 was raised.[24]

Due to the bankruptcy of the professional branch, the amateur association also landed in dire financial straits. In February 2013, the tax authorities gave the club two weeks to settle an overdue debt.[25] The amateur branch was saved by external investors. Sportpark Berg & Bos was also retained.

The amateur section of AGOVV continued after bankruptcy. As of the 2013–14 season, AGOVV switched from having a Sunday team to Saturday football. AGOVV started in the Saturday Vierde Klasse B, the ninth tier of Dutch football. After one season in the Vierde Klasse Saturday, AGOVV were immediately promoted to the Saturday Derde Klasse B.[26] In 2016, AGOVV were promoted to the Saturday Tweede Klasse G. The shared youth academy with Vitesse was discontinued, which meant that the club saw a drastic fall in membership in the youth department. Since then, the team have managed to establish under-7, under-9 and under-19 teams.

Financially, the club also showed improvements. Debts were reduced from €600,000 to €420,000.[27] The renovation of the wooden stand on the Sportpark Berg & Bos was completed and was reopened on 20 August 2016 by alderman Detlev Cziesso.[28] As of the 2020–21 season, AGOVV played in the Derde Klasse, the eighth overall tier in the Dutch football league system.

Below is a table with AGOVV's domestic results since the introduction of professional football in 1956.

The Vitesse/AGOVV jeugdopleiding (English: Vitesse/AGOVV Youth Academy) was officially founded in 2005, when the youth academies of AGOVV and Vitesse merged. The newly formed academy received the official regional youth academy status from the KNVB and was based on the structure of the former Vitesse youth academy, with the addition of various AGOVV youth players and staff members. The cooperation between AGOVV and Vitesse was terminated as of July 2013, where the academy continued solely as Vitesse's youth academy.

Minor Dutch football leagues in 2020–21
Categories
Categories:
{{bottomLinkPreText}} {{bottomLinkText}}
This page is based on a Wikipedia article written by contributors (read/edit).
Text is available under the CC BY-SA 4.0 license; additional terms may apply.
Images, videos and audio are available under their respective licenses.