International Red Aid (also commonly known by its Russian acronym MOPR, for Междунаро́дная организа́ция по́мощи борца́м револю́ции) was an international social service organization established by the Communist International. The organization was founded in 1922 to function as an "international political Red Cross", providing material and moral aid to radical "class war" political prisoners around the world.

The International Workers Aid society, known colloquially by its Russian-language acronym, MOPR,[1] was established in 1922 in response to the directive of the 4th World Congress of the Comintern to appeal to all communist parties "to assist in the creation of organizations to render material and moral aid to all captives of capitalism in prison."[2]

Julian Marchlewski-Karski was named chairman of the Central Committee of MOPR, the governing body of the new organization. After 1924, the name of this directing body was changed to the Executive Committee.[3]

The first plenary session of the Central Committee of MOPR was held in June 1923 in Moscow. At this gathering it was determined that MOPR should establish sections in all countries, particularly those suffering from so-called "White terror" against the revolutionary movement. 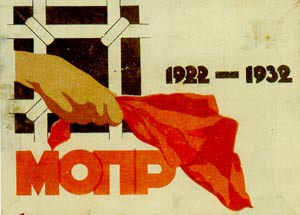 The first international conference of MOPR took place in July 1924, simultaneously with the 5th World Congress of the Comintern.

Stasova noted that two forms of the organization existed, "mass organizations" — such as those of the USSR, Germany, France, the United States — and "organizations of a committee type", which limited themselves to legal and material aid to political prisoners and their families without attempting to establish large-scale membership organizations.[6]

The 1st World Congress of MOPR was held in November 1932. At that gathering it was announced that as of January 1 of that year, MOPR had established 67 national sections outside of the USSR, with 1,278,274 members.[8]

MOPR was headed by Elena Stasova until 1938, after which time its international character was deemphasized.

As of 1924 the organization had national affiliates in nineteen countries. By 1932 it claimed sixty-two affiliates (excluding the Soviet Union) with a total of 1,278,274 individual members.[9]

The International Red Aid made its first appearance in Spain as a charity organization during the workers’ revolt of October 1934 in Asturias. It provided aid to those imprisoned for their role in the rebellion, and organize amnesty campaigns for prisoners that were to be executed.

The organization, which included many artists and writers, was later re-formed and expanded in Barcelona in January 1936, with the aim of opposing fascism on multiple fronts.

Activities during the Spanish Civil War 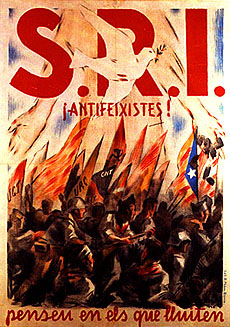 SRI poster in Catalan language. Text reads 'Anti-Fascists: Think of those who struggle!'

During the Spanish Civil War, the writer Joaquín Arderíus served as the organization's president before exiling himself to France and then Mexico. The SRI created soup kitchens and refugee camps throughout the territory controlled by the Republicans, and also provided libraries for Republican soldiers, but many of their programs –as well as the food and aid that it collected- were focused on providing aid for children. [1] For example, the SRI founded the Escuela Nacional para Niños Anormales (National School for Mentally Disabled Children) in Madrid, with 150 students. It also founded a Children's Park on the outskirts of Madrid, providing shelter to an additional 150 children.

Medical contributions included the establishment of 275 hospitals, ambulance services, the establishment of the Orthodontics Clinic and College, dental hygiene campaigns, and the mobilization of dentists to the front. The Workers' Party of Marxist Unification (POUM), a minor Marxist party in Spain at the time, organized a parallel Socorro Rojo del P.O.U.M. in opposition to the International Red Aid.[10]

The ranks of the Fifth Regiment (dissolved January 21, 1937), established by the Communist Party of Spain at the outbreak of the Civil War, were also swelled by members of the SRI. The Fifth Regiment, based on the Soviet Red Army, included Juan Modesto and Enrique Líster amongst its leaders, and fought primarily in the battles in and around Madrid throughout 1936. The SRI also helped Communist sympathizers in Nationalist Spain make their way to friendly territory.

The insignia of the SRI consisted of an "S" (for Socorro) behind the bars of a prison.

The Dutch section of International Red Aid held its first congress in 1926.[11] The same year it began publishing Rode Hulp.[12]

The Red Aid of Finland was active during the 1930s, led by the Communist Party of Finland. It gave assistance to revolutionary prisoners in Finnish jails. Women connected to Red Aid would make handicraft works and organized bazaars, in order to finance the activities of the organization. The organization also tried to mobilize public opinion against ill-treatment of the prisoners. The Red Aid of Finland published Vankien Toveri.[13]

Towards the ends of the 1920s, Farabundo Martí became the leader of the International Red Aid in Latin America.[14] Julio Antonio Mella, the Cuban communist leader exiled in Mexico since 1926, was a leading figure in the Mexican section of the organization.[15]

The largest section of MOPR was its Soviet branch, which accounted for the majority of the organization's international membership. MOPR organized numerous lotteries and fundraising drives.