Pal Joey is a 1957 American musical comedy film directed by George Sidney, loosely adapted from the Rodgers and Hart musical play of the same name, and starring Rita Hayworth, Frank Sinatra, and Kim Novak. Jo Ann Greer sang for Hayworth, as she had done previously in Affair in Trinidad (1952) and Miss Sadie Thompson (1953). Novak's singing voice was dubbed by Trudy Stevens.[2] The choreography was managed by Hermes Pan. Nelson Riddle handled the musical arrangements for the Rodgers and Hart standards "The Lady Is a Tramp", "I Didn't Know What Time It Was", "I Could Write a Book", and "There's a Small Hotel".

Pal Joey is one of Sinatra's few post-From Here to Eternity films in which he did not receive top billing, which surprisingly went to Hayworth. Sinatra was, by this time, a bigger star, and his title role was predominant. When asked about the billing, Sinatra replied, "Ladies first." He was quoted as saying that, as it was a Columbia film, Hayworth should have top billing because "For years, she was Columbia Pictures" and that with regard to being billed "between" Hayworth and Novak: "That's a sandwich I don't mind being stuck in the middle of." As Columbia's biggest star, Hayworth had been top-billed in every film since Cover Girl in 1944, but her tenure was to end in 1959 with Gary Cooper in They Came to Cordura.

Sinatra's earnings from the film paid for his new home in Palm Springs. He was so delighted that he also built a restaurant there dedicated to the film, named Pal Joey's.[3]

The setting is San Francisco; Joey Evans (Frank Sinatra) is a second-rate singer, a heel known for his womanizing ways (calling women "mice"), but charming and funny. When Joey meets Linda English (Kim Novak), a naive chorus girl, he has stirrings of real feelings. However, that does not stop him from romancing a former flame and ex-stripper (Joey says, "She used to be 'Vera Vanessa the undresser...with the Vanishing Veils'"), now society matron Vera Prentice-Simpson (Rita Hayworth), a wealthy, willful, and lonely widow, in order to convince her to finance Chez Joey, a night club of his own.

Soon Joey is involved with Vera, each using the other for his/her own somewhat selfish purposes. however, Joey's feelings for Linda are growing. Ultimately, Vera jealously demands that Joey fire Linda. When Joey refuses ("Nobody owns Joey but Joey"), Vera closes down Chez Joey. Linda visits Vera and agrees to quit in an attempt to keep the club open. Vera then agrees to open the club and even offers to marry Joey, but Joey rejects Vera. As Joey is leaving for Sacramento, Linda runs after him, offering to go wherever he is headed. After half-hearted refusals, Joey gives in, and they walk away together. Left to right: Hayworth, Sinatra, and Novak in a film still

The happy ending of the film contrasts with the conclusion of the stage musical, where Joey is left alone at the end.

The transformation of Joey into a "nice guy" diverges from the stage musical, where Joey's character is an anti-hero. Joey is also older in the film—on stage he was played by 28-year old Gene Kelly; here, 42-year old Sinatra takes the reins.

The film differs from the stage musical in other key points: the setting was moved from Chicago to San Francisco, and the stage Joey was a dancer. The plot of the film drops a blackmail attempt, and two roles prominent on stage were changed: Melba (a reporter) was cut, and Gladys became a minor character. Linda became a naive chorus girl instead of an innocent stenographer and some of the lyrics to "Bewitched, Bothered and Bewildered" were changed. Also in the film, Vera Prentice-Simpson is a wealthy widow and former stripper (billed as Vanessa the Undresser) and thus gets to sing the song "Zip". (Since that number requires an authentic burlesque drummer to mime the bumps and grinds, the extra playing the drums is disconcertingly swapped with a professional musician in a jump cut).

Of the original 14 Rodgers and Hart songs, eight remained, but with two as instrumental background, and four songs were added from other shows.[4]

Some of the recordings on the soundtrack album featuring Sinatra only are not the same songs that appeared in the film. "The Lady Is a Tramp" is a mono-only outtake from Sinatra's 1957 album A Swingin' Affair!,[5] while three others ("There's a Small Hotel", "Bewitched", and "I Could Write a Book") were recorded in mono only at Capitol Studios.[6] "I Didn't Know What Time It Was" appeared in an odd hybrid: The first half of the song was recorded at Columbia Pictures but differs from the version used in the film, while the second half is the same as used in the film, also recorded at Columbia.[7] "What Do I Care for a Dame" is the film version, as recorded at Columbia. The Sinatra songs as they appear in the film as well as those performed by Rita Hayworth and Kim Novak (both were dubbed), Jo Ann Greer (Hayworth) and Trudi Erwin (Novak) were recorded at Columbia Pictures studios in true stereo. 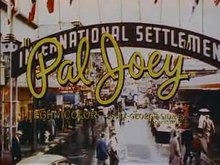 Trailer for the film

Opening to positive reviews on October 25, 1957, Pal Joey was an instant success with critics and the general public alike. Variety stated, "Pal Joey is a strong, funny entertainment. Dorothy Kingsley's screenplay, from John O'Hara's book, is skillful rewriting, with colorful characters and solid story built around the Richard Rodgers and Lorenz Hart songs. Total of 14 tunes are intertwined with the plot, 10 of them being reprised from the original. Others by the same team of cleffers are 'I Didn't Know What Time It Was', 'The Lady Is a Tramp', 'There's a Small Hotel' and 'Funny Valentine'."[9]

The New York Times stated, "This is largely Mr. Sinatra's show...he projects a distinctly bouncy likeable personality into an unusual role. And his rendition of the top tunes, notably "The Lady Is a Tramp" and "Small Hotel," gives added lustre to these indestructible standards."[10]

With theatrical rentals of $4.7 million in the United States and Canada, Pal Joey was ranked by Variety as one of the 10 highest-earning films of 1957.[11] It earned rentals of $7 million worldwide.[1]

The film is recognized by American Film Institute in these lists:

Wikimedia Commons has media related to Pal Joey.
Films directed by George Sidney
Authority control
Categories
Categories:
{{bottomLinkPreText}} {{bottomLinkText}}
This page is based on a Wikipedia article written by contributors (read/edit).
Text is available under the CC BY-SA 4.0 license; additional terms may apply.
Images, videos and audio are available under their respective licenses.