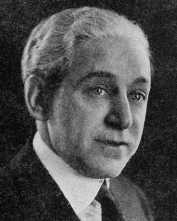 Harry Reichenbach (1882 – 1931) was a US press agent and publicist who dreamed up sensational publicity stunts to promote films. He was one of the founding members of the Associated Motion Picture Advertisers.[1]

Born in Frostburg, Maryland, in 1882, Reichenbach worked both for actors as an agent and for the film studios as a promoter. Among his first jobs was to promote a woman called "Sober Sue" who never smiled. He got her a contract at the Victoria Theater on Broadway and made them offer $1,000 to any New York comedian who could make her laugh.

In December 1916 Reichenbach founded his own public relations company.[9] Reichenbach claimed to have popularized the painting September Morn,[10] but that story is disputed.[11]

To promote the sequel the Return of Tarzan, Reichenbach hired an actor who checked into the Hotel Bellclaire with a name Thomas R. Zann. Zann had a huge crate that was hoisted to his room through a window. Then he ordered fifteen pounds of raw beef. When the cook and the hotel detective arrived, they saw that the meat was for the guest's pet lion. Hotel called for police and the "Mr Zann" explained to them and the press that he was a huge Tarzan fan.

One of the actors Reichenbach worked for was Rudolf Valentino. Reichenbach convinced him to grow beard to cause a bad reaction that was followed by a good one when he "agreed" to shave it.

For the 1915 film Trilby, which included nude scenes and hypnotism, Reichenbach hired a young woman to run several times around the block and take a seat besides him just before the movie ended. She looked agitated and exhausted and Reichenbach hinted that the hypnosis scenes in the movie might have something to do with it. He also arranged that various psychologists would speculate on possible effects of hypnosis through cinema.

In other publicity stunts, Reichenbach would stage fake kidnappings of actresses set to appear in his films. One attempt involved crossing the border into Mexico, which resulted in United States president Woodrow Wilson writing an angry letter to Reichenbach asking him to stop.

In 1928, Reichenbach was managing the Colony Theater in New York City and took Walt Disney's animated film Steamboat Willie for a two-week run.

When Reichenbach was working for actor Francis X. Bushman, he took him to see studio executives. He began to walk with Bushman from the railway station and dropped pennies to the street from his pocket. Many people followed them, picking up the coins. The crowd gave the studio executives an impression that Bushman was very popular and they signed him up for a big contract with Metro Pictures.

For The Virgin of Stamboul, he hired actors to pose as a clandestine Turkish rescue party that was hunting for a royal bride that had eloped with an American soldier.[12] Reichenbach leaked the details to the press. His 1931 book, Phantom Fame, written with David Freedman, was the basis of the 1932 film The Half-Naked Truth.