For faster navigation, this Iframe is preloading the Wikiwand page for The Young Rajah.

The Young Rajah is a 1922 silent film starring Rudolph Valentino. The film was based on the book Amos Judd by John Ames Mitchell.[1]

After fifteen years, Joshua Judd (Charles Ogle) tells his adopted son, Amos (Valentino), that his real father was an Indian maharajah overthrown by Ali Khan (Bertram Grassby). Amos, then a young boy (played by an uncredited Pat Moore), was rescued by General Devi Das Gadi (George Periolat) and taken to America for his safety. (Joshua's merchant brother had been a trusted friend of the late maharajah.)

Amos attends Harvard University. There he incurs the hatred of Austin Slade, Jr. (Jack Giddings), whom he beats out for a spot on the rowing team. At a party celebrating a rowing victory over arch-rival Yale, a jealous Slade calls Amos "yellow" and pours a drink on him, causing Amos to punch him. Slade grabs a chair as a weapon, but Amos ducks, and Slade falls through an open window to his death. Amos is cleared of all wrongdoing, but the newspaper story attracts the notice of Amhad Beg (J. Farrell MacDonald), Ali Khan's Prime Minister.

That summer, at a party hosted by close friend Stephen Van Kovert (William Boyd), Amos becomes attracted to one of the other guests, Molly Cabot (Wanda Hawley). By chance, Molly and her family decide to vacation in Amos's hometown. As they become better acquainted, Amos overcomes Molly's initial dislike of him. However, Molly tells her father (Edward Jobson) that she cannot marry someone who is not one of her "own people", however much she loves him. Instead, she agrees to marry longtime suitor Horace Bennett (Robert Ober), who had been a good friend of Slade's. Bennett tells Amos to stay away from his future wife, but when he also calls Amos a murderer, Amos chokes him into apologizing. As he leaves, Amos is struck in the head by a rock thrown by Bennett. Seeing this, Molly rushes to Amos's side and breaks off her engagement to Bennett.

The happy couple decide on an early wedding, but Amos has a vision showing him being murdered the day before. He has had visions before; all came true, even if he tried to prevent them. His family is supposedly descended from Prince Arjuna; the god Krishna granted Arjuna and all his descendants the gift of prophesy. When he reveals this to his future father-in-law (who has already witnessed the accuracy of Amos's visions), the latter suggests he lock himself away in the sanatorium of a friend for the day.

Amos does so, but Amhad Beg and his men find and kidnap him. Just as they are about to kill him, Amos is rescued by the mystic Narada (Josef Swickard), who also can see into the future, and his followers. Narada convinces him to forgo his own happiness and return to India to overthrow the tyrant. When Amos is welcomed by his people and the army revolts, Ali Khan commits suicide. The new Maharajah of Dharmagar takes comfort in his latest vision, which shows his wedding to Molly. 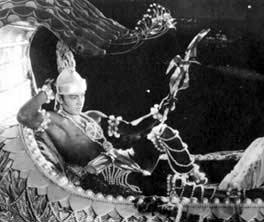 Rudolph Valentino in a costume designed by Natacha Rambova.

This film was one of Valentino's most commercially and critically unsuccessful motion pictures. Photoplay described it as "The glamorous Rodolph Valentino's latest—and worst—vehicle."[2] The film is perhaps best remembered today for its elaborate and suggestive costumes, which were designed by Valentino's wife Natacha Rambova. Photographs of Valentino wearing these outfits, some of which left little to the imagination, are still widely circulated today.

For most of the twentieth century, The Young Rajah was considered a lost film. However, in 2005, Turner Classic Movies announced that they were financing the restoration of the surviving footage of the picture, and the channel aired the resulting program in May 2006. The movie was assembled from poor-quality film clips and still photos, with additional title screens being added to bridge the gaps in the storyline. In addition, some intertitles were taken from a Spanish-language edition, and these were translated and replaced with new title screens.

Wikiquote has quotations related to The Young Rajah.

Wikimedia Commons has media related to The Young Rajah.
Categories
Categories:
{{bottomLinkPreText}} {{bottomLinkText}}
This page is based on a Wikipedia article written by contributors (read/edit).
Text is available under the CC BY-SA 4.0 license; additional terms may apply.
Images, videos and audio are available under their respective licenses.